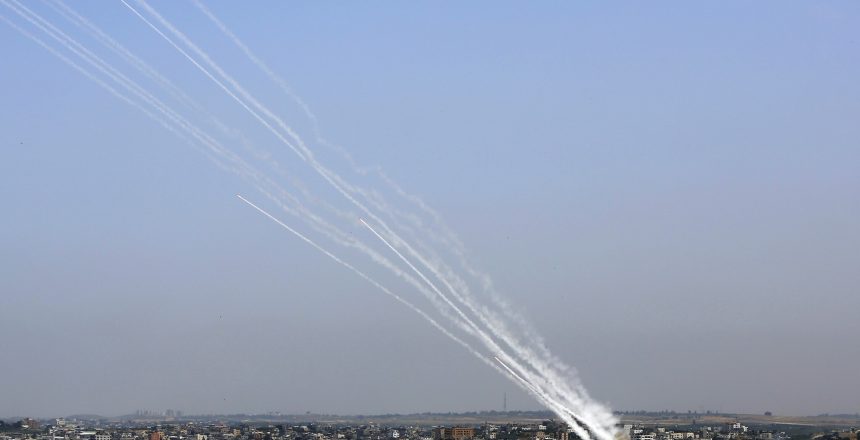 Once again the Hamas terror government in Gaza has been sending rockets into Israel, this time as far as Jerusalem itself.

In response to violent protests by Palestinian youth in Jerusalem the Israelis have tried to contain the situation, but the Palestinian activists are hoping for a third intifada (uprising—like 1987 & 2000). This takes pressure off the Palestinian Authority which has become unpopular with the general Palestinian population in recent times. The PA is seizing its opportunity and inciting an escalation in the violence against the Israelis. Hamas from Gaza has joined in not wanting to miss its opportunity because from normal peace-loving Palestinians in Gaza they are not too popular either.

The protests started weeks ago over a Jewish group trying to reclaim property currently held by Arabs in East Jerusalem. It is in the courts and a proper legal process will justly decide who rightfully owns the property. Forget some of the distorted reports you may hear from some media outlets. Added to this is the complication that the Muslim holy month of Ramadan just ended, coinciding with “Jerusalem Day”, the day Jews celebrate the reunification of the entire city of Jerusalem which took place on 7 June 1967 in the Six Day War, after years of division under Jordanian rule.

This clip will show you the volatile situation unfolding in Jerusalem, where you can see and hear the Jews at the Western Wall celebrating Jerusalem Day, in contrast to the sound of stun grenades etc. going on around them on the temple mount compound as Israeli security forces attempt to bring the situation under control:

In the backdrop of indiscriminate rocket attacks from Gaza, Israeli civilians have been killed and others injured. Massive material damage from the rockets as well as from rioting by Arabs within Israel has taken place. The Israeli Defense Forces are responding to the Hamas led attacks with precision air-raids, first warning the local Gaza residents of impending responses and then carrying them out. Israel has the right to both defend itself and then respond as they are targeting the Hamas operatives who are escalating the conflict. Hundreds of rockets have now fallen all over Israel’s central and southern regions.

Here is a Press Release from the Israeli Embassy in Wellington:

I trust this finds you well.

The United States and United Kingdom have both come out in the last 24 hours condemning the unprovoked rocket attacks from Gaza into the sovereign territory of the State of Israel, some rockets reaching Jerusalem. The U.S. State Department said it “condemns in the strongest terms the barrage of rocket attacks fired into Israel in recent hours. This is an unacceptable escalation.”

The story around this barrage concerns Israel’s internal security and trouble they are having at the moment with Palestinian extremists escalating tension in Jerusalem, but I do admit that there were some minor provocations also coming from the other side. On the whole however, the violence is being perpetrated by the Palestinian youth, egged on and incited by the Palestinian leadership. This internal struggle, which will run its course and fade away, gives the Hamas government in Gaza no right to fire rockets into a sovereign state—the State of Israel.

Will New Zealand publish a condemnation of the Rocket attacks from Gaza into Israel? I sincerely hope so.

Some pics of the destruction happening within Israel:

[6] Pray for the peace of Jerusalem: “May those who love you be secure.