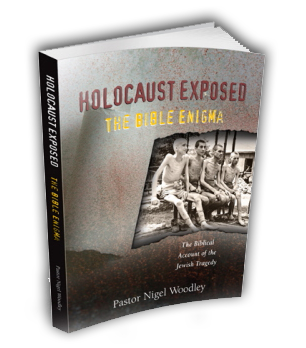 HOLOCAUST EXPOSED/EXPLORED The Biblical Account of the Jewish Tragedy

The question of the twentieth-century is answered in Holocaust Exposed(printed) and Holocaust Explored(E Book). This book is a first in that it offers a comprehensive Biblical account and answer to the greatest tragedy in human history. Whereas many have spoken before on the horrors of the Holocaust, this book gives opportunity for the Keeper of Israel to have His say.

The lessons of the Holocaust can only be fully understood in the light of the Holy Scrpitures. This book will teach you:

“The ground that was soaked with so much Jewish blood has become sacred ground. The era of this enormous tragedy has also become sacred. I have received a mandate from Heaven to report comprehensively on what God has to say about that era. It is my duty to God to report on the Holocaust from His book.” – Pastor Nigel Woodley

The book is about the modern journey of the Jewish people, and their plight during the Nazi Holocaust of Hitler’s Europe.
The book covers the period from the end of the nineteenth century right through to the present day, but particularly focuses on the turbulent years of the Second World War.

The reader is given a good grounding of the events that led up to the Holocaust, as well as the Holocaust itself and the events that followed it. Sound facts and figures, as well as personal testimonies, all give the book muscle, adding strength and weight to the subject matter. The spine that holds everything together is the prophetic Scripture of the Bible.

There are no reviews yet.

Only logged in customers who have purchased this product may leave a review.