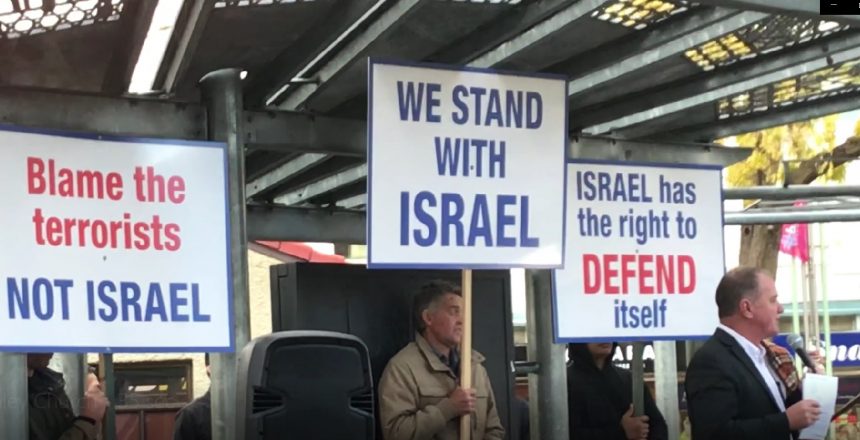 Israel has the right to defend itself against the unjustified rocket attacks from Gaza. In 11 days of fighting, which broke out on Monday 10 May 2021 with an unprovoked attack by Hamas toward the State of Israel, nearly 4,400 rockets were indiscriminately fired from the terrorist organizations in Gaza. Israel has the right to respond to the attacks as part of its defense. We stood alongside the State of Israel and declared our full support for the Jewish State. Nothing justifies what the terrorists in Gaza and their advocates in the West Bank are doing to the democratic State of Israel!

Simultaneous rallies were held in Hastings, Wellington and Auckland at 3:00 PM in the afternoon. Despite the bitter cold in all centers, reasonable crowds turned out in support of the Jewish State. Here is the report:

In Hastings as 3:00 PM approached we counted 200 people. A little while later that number had increased to 250, and then we lost count:

It was unfortunate that media did not come to Hastings to report on the support for Israel in Hawkes Bay, however we were thrilled that TV1 did a good report on Auckland’s rally making mention also of our other two rallies. Ashley Church, our special guest and a resident of Hawkes Bay, did a great job explaining clear details and facts that are often left out of the narrative. He is a director on the Israel Institute of NZ. I am grateful he was able to come and contribute so tremendously to our rally. Here is a snippet:

Text of Ambassador’s Message to the RallyDownload

Opening Statements of the Rally:

Some of the facts about the War which were discussed:

We were bold in proclaiming WE STAND WITH ISRAEL!

In Auckland up to 500 supporters turned out in the bitter cold to create a warm festive atmosphere:

For the report on Auckland go here:

In Wellington about 100 attended the rally in the Cuba Mall:

The Christian Debt to ISRAEL!

Dr. Derek Prince, one of the greatest and most widely accepted Bible Scholars of the twentieth century among Christians, wrote a short article on why Christians need to support Israel. It can be accessed here as a PDF:

For more good resources by Derek Prince go to: