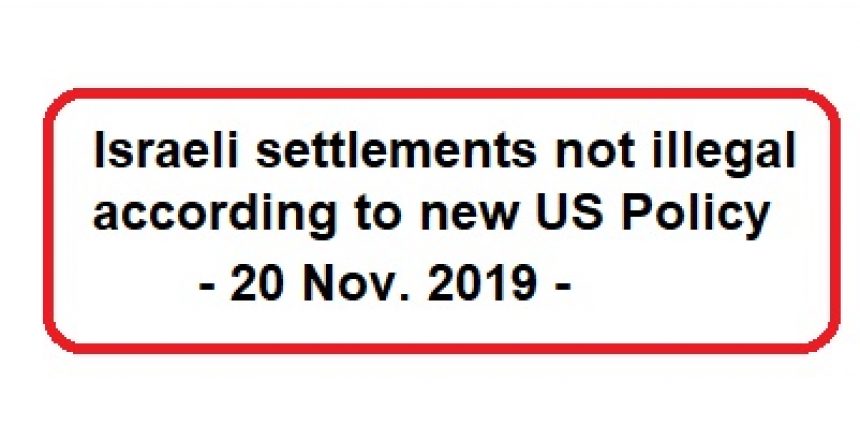 Commendations for new US policy on Israeli Settlements-20 Nov. 2019

The following is a Press Release put out after the US Secretary of State announced a change in US policy toward Israeli settlements on the West Bank:

The Flaxmere Christian Fellowship Church in Hastings welcomes the news of a change in United States policy regarding Israeli settlements on the West Bank. Yesterday (Tuesday) Secretary of State Mike Pompeo announced that the United States will no longer consider Jewish settlements on the West Bank as being “illegal”. This is a just decision as the Jewish people are simply expressing their right to live on the land of their ancestors and forefathers. The land has for millennia been the heartland of the Jewish people whether they have been living in that land or living away from it in forced exiles by foreign nations. We commend the boldness of the US administration to pull away from a faulty policy which is flawed with injustice and bias against the people of Israel. We hope that other nations will soon follow suit. It is time to right a wrong which forbids an indigenous people from living on its indigenous land. New Zealand too must follow suit in its foreign policy, otherwise it can be accused of hypocrisy and double standards: on one hand NZ rightfully is catering to and seeking reconciliation with the indigenous people of Aotearoa and recognizing the right of Maori, while at the same time forbidding the same right to the indigenous people of another land—in this case the Jewish People in the Land of Israel. It is time for New Zealand to follow the lead of the United States in this policy.

The Americans have once again stuck out their necks with another policy change for the Middle East. In recognising the right of the Jewish people to settle on the West Bank they have now stated that the “settlements” are not illegal. As reported on Wednesday not everyone is happy, but I am. It is unjust to tell the Jewish people that they can’t live on their ancestral and indigenous homeland. Well done America. The fact that the 28 nations of the European Union disagree doesn’t matter. Sometimes the majority get it wrong, as is the case here. Justice speaks louder than any majority.

As for New Zealand and its policies: it is commendable that the Ministry of Foreign Affairs condemned the most recent round of 460 rockets being fired into Israel last week by the Islamic Jihad. It is however sad that once again NZ joined the bullies at the UN with its usual annual November round of Israel bashing. However I still hope the former action is a positive sign of a shift in our policy toward the conflict.

I agree with the stance of the American administration regarding Israeli settlements on the West Bank. As reported on Wednesday not everyone is happy that the United States no longer considers Israeli settlements “illegal”. However, people like me who know the history well enough are very happy with this policy shift. What gave the international community the right in the first place to tell the Jewish people that they have no right to settle on their historical land? It doesn’t matter to me that the 28 nations of the European Union do not agree with the US on this policy. Sometimes the majority get it wrong as was the case with Nazi Germany. So it is in this case. There is one thing that can shout louder than a majority and that is the voice of justice. It is so wrong that the Jewish people are denied the right to build and settle on what is their indigenous homeland. Once again the Trump Administration have recognised and corrected a historical wrong. Well done America.

It is not very often that we are commending the Ministry of Foreign Affairs for its actions in regard to the State of Israel, but on Wednesday they came out condemning rocket attacks from the Gaza Strip into Israel.

This is a first in recent times, and hopefully signals a welcome change in our foreign policy toward the conflict. In the past we have often seen a bias against Israel in these sort of escalations but I must say it is pleasing to see this. Click here for the Newshub report.

Below is a response I sent to the Minister of Foreign Affairs:

Thank you for the recent condemnation issued by your ministry against the rocket attacks from Gaza into Israel. It certainly heartens people like me who see the condemnation from the Ministry of Foreign Affairs as a very commendable response to an unjustified attack by the Islamic Jihad from Gaza. Thank you. You will already know that the Israelis are pretty pleased with this response.