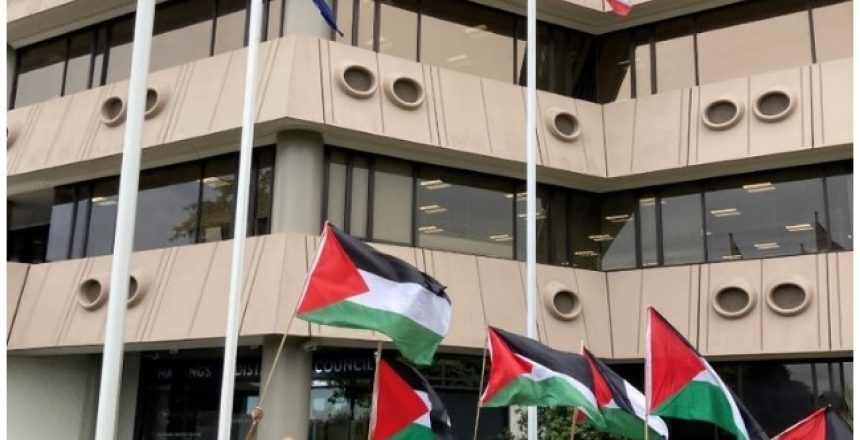 At the moment the Palestinian flag represents a refusal to negotiate with their “peace partners” the Israelis. The Palestinians agreed to make no unilateral moves for independence until bilateral talks between them had produced a just and negotiated settlement. Moves like this are trying to circumvent such agreements. The flag also currently represents the stubbornness and obstinacy of the Palestinians to compromise with the Israelis at all – theirs is a policy of ‘give us all we want or you’ll get no peace’, whereas the Israelis on at least two prior occasions in 2000 and 2008 have made generous and unparalleled offers to give the Palestinians nearly everything they wanted, and on both occasions their offers were not accepted.

Being from Hastings I wrote to the Hastings District Council mayor – Sandra Hazlehurst. That email follows, and it is rather cordial in tone as we are known to each other:

I hope you are well and prospering.

I was a bit shocked to see yesterday a Palestinian flag flying from the Council flagpole. I guess Council is wanting to be inclusive and all-embracing but please let me point a couple of things out:

I would love the opportunity to speak to you further about these things and if you would like that to take place then please let me know.

Despite this Sandra, I still believe you are a great mayor.

I received a very short but polite reply to that email, and so I sent another :

Thank you for your rather short reply.

Had Council sought any advice regarding the wisdom of flying the Palestinian flag?

All-embracing and inclusive should not mean empowering terrorists surely, as I explained in my previous email. I have no doubt that pressure was applied on Council and I can guess from whom the pressure came. I raise the concern that now every year on November 29 the same pressure will be applied to Council.

I am concerned that Council would do such a thing without hearing from both sides of this controversy. I stated before that I am willing to offer some light on the subject as I appreciate that most people do not have the time to be involved. That offer still stands.

On 14 May 2023 Israel commemorates its 75th anniversary as a state having survived against all odds: first from the Nazi Holocaust, then Middle East aggression against it by Arab armies, and now state funded terror organisations seeking to destroy her. Would the Council be willing to allow the Israeli flag to be flown on that day?

Sincere blessings to you Mayor Sandra,

I am still waiting for a reply!