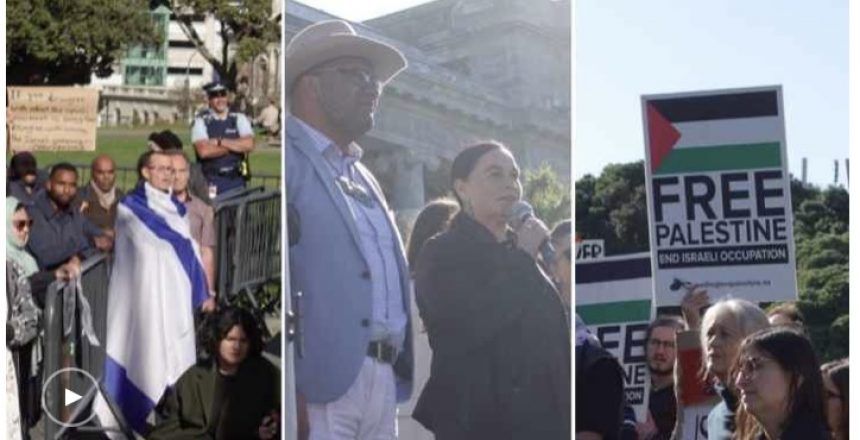 The Palestinian lobby in New Zealand organized a rally on the grounds of Parliament on Wednesday afternoon demanding that NZ recognize Palestinian statehood now. They had as their support from Parliament: Golriz Ghahraman (Greens), Marama Davidson (Greens), Dr Duncan Webb (Labour), and the two Maori Party MPs Rawiri Waititi and Debbie Ngarewa-Packer. Between 150 and 200 turned out to support their cause. The crowd was well behaved but very wrong in its ideology and perception.

Using the current crisis of the latest war going on because of Hamas, they hated on Israel with expressions of “colonialist rule”, “apartheid state” and “murderous” regime. With chants of “From the River to the Sea Palestine will be free” (and others) they put forward their very skewed and false narrative. They blamed the Israelis for the suffering of the Palestinians in Gaza with plenty of mention about Gazan civilian casualties (and we truly sympathize with them). I took particular note that there was not one acknowledgement of the millions of Israeli civilians who are being terrorized, nor mention of Israelis being killed and injured as well. No mention of the terrorist entity Hamas who is responsible for the conflict. I can report this because I was there.

I learned about the proposed rally on Monday evening. By Tuesday morning at 8:00 o’clock I had purchased my return tickets to Wellington and grabbed the biggest Israeli flag I could find. I didn’t have the time or the will to organize a busload to Wellington this time (we are planning for a big rally in Hastings on Sunday afternoon), so I decided I would go clandestinely as a lone protestor and make my point. I had the time of my life. I am grateful for the support of Joanna Moss who took some pics, and there were some other supporters keeping a low profile who were encouraging me.

As the Palestinian support rally began I strategically unfolded the big Israeli flag on the steps of Parliament in front of the crowd and wrapped it around myself. I knew I had become a distraction to those who had just begun speaking. I then positioned myself at the front and to the right side of the speakers and made my stand. I must admit up to this point the crowd was respectful and gracious toward me – until I started interjecting and challenging their lies about Israel. Now I had their full attention and that of those crazy MPs. The language toward me became quite colorful and reminded me of my past life when I was a teenager.

I challenged and heckled every speaker (I think there were six altogether) and when they tried to drown me out by chanting “Free Free Palestine”, in-between their lines as they caught their breaths I would chant at the top of my lungs “Live Live Israel”.

I must admit I was a nuisance to their cause and was blessed to have come out of it without a scratch – I had the Good Shepherd of Israel watching over me and two very kind NZ Policeman. I had the time of my life, and although I was just a tad nervous (not much) to start with, by the time I donned the Israeli flag I felt like I was wearing Elijah the Prophet’s mantle 🙂

Their argument is the same as we have heard before. It goes like this – The Palestinians are the original and true inhabitants of the land and have been taken over by the colonial state of Israel. The Israelis oppress and suppress the Palestinian people and treat them as second-class citizens. The Israelis are responsible for the suffering of the Palestinians. We know these are lies, but what is concerning is that they managed to get at least 5 MPs (there may have been one or two more) to back their cause. I must admit they are the crazy MPs. Some of my interjections were “rubbish” (many times), “blame the terrorists”, “what about the Israeli civilians”, and when they gave their acknowledgements I shouted “what about acknowledging Israel?”. By the time Debbie Ngarewa-Packer referred to me as a visitor in her whenua and referred to white colonial rule I couldn’t be bothered replying to such bull. Newshub reported on their website she had shut me down – NO! My hard-drive couldn’t process the amount of spam that was being tossed in my direction.

I want to encourage everyone who supports Israel not to be afraid but to be bold and stand firm and shout loud because ours is a just cause. The campaign to arouse sympathy for the Palestinian cause is hiding behind a barrage of Hamas rockets. Israel has the right to defend itself and to respond to the terrorists and to live unashamedly on all their historical land. For Zions sake we will not keep silent and for the protection of Zion we will speak up.

Fortunately a plan by the Greens (led by Golriz Ghahraman) to get Parliament to vote on recognizing Palestine as a state did not go through.

Newshub report on the “heckler”: