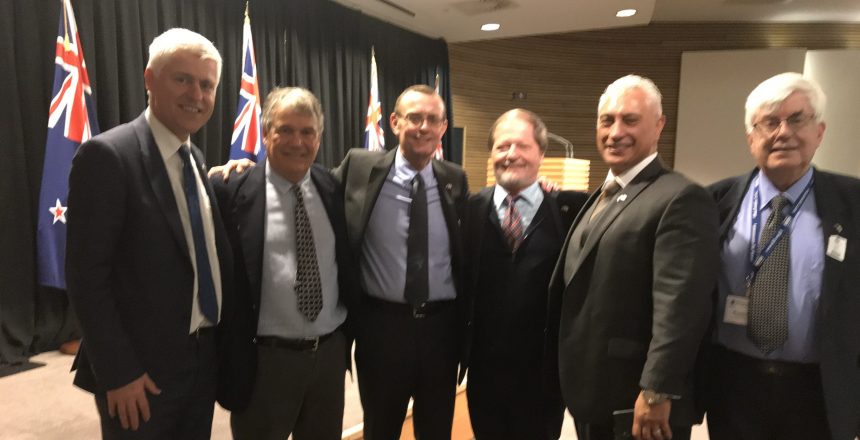 The wheels of change turn slowly in powerful places and we have learned that consistent pressure upon politicians and government is the best way to steer toward change. From the days of our public rallies in support of the State of Israel during the Gaza War of 2014 we knew that the governing authorities of the nation were watching us. If this was simply curious concern on their part and something they had placed in the “let’s keep an eye on this group” basket, then that changed in 2015 with our written (hard-copy) petition of 11,686 signatures placed directly in front of them.

New Zealand’s Foreign Minister, Murray McCully, began his tenure of two years on the UN Security Council—a position that carries huge weight and influence in international affairs—at the beginning of 2015. That tenure would end at the end of 2016. McCully’s words at the beginning were very concerning to me, words along the lines of:

‘What’s the hold up in the Middle East? I think we’ll have a go at sorting out this long-standing problem between the Israelis and the Palestinians!’

Although they were not his exact words I knew instinctively that they were his intentions, and straight away I knew it spelled trouble for Israel. I reasoned that New Zealand at the UN would try to bring pressure upon the Israelis to give up land—land that people like me believe is their inherit right to have (my instinctive reasoning proved to be correct). The result was our petition to Parliament later in that year in order to try to pressure the Foreign Minister and the Ministry of Foreign Affairs not to go down that track. I have corresponded with many letters/emails to Ministers/Parliamentarians over the years—particularly since 2014—and I have found this:

It is great to have the privilege in our country to be able to correspond with our governing authorities. However there are times when you have to shout like a lunatic to be heard!

Our petition called upon the NZ Government to cease from pressuring the State of Israel to give up its rightful and God-given land, and instead to recognise Israel’s right to have sovereignty over the entire land of Israel, including Judea & Samaria (West Bank), and all of Jerusalem. Stuart Nash who was in opposition in those days took our petition to Parliament and for that we were very grateful.

Because of this and other advocacy work we do in regard to Israel we are known to the Ministry of Foreign Affairs.

Our work in trying to reach governing authorities was crowned in 2018 when Simon Bridges, Leader of the Opposition, acknowledged that McCully’s resolution aforementioned was “wrong”. Those advocating in NZ on behalf of the Jewish State like ourselves, as well as other groups, felt a sense of achievement. Not only have we been heard, but also acknowledged by the National Party in regards to that resolution.

It seems the National Party have become much more open about listening to what the pro-Israel lobby in NZ has to say. The same cannot be said of the present Labour led Government. There seems to be a deliberate refusal with this government to want to have much to do with the Israelis at all. I have heard that the Prime Minister has prevented some of her ministers from going to Israel in their official capacities. That is a bit of a shame as just prior to the last election the Prime Minister Bill English and the Foreign Minister Gerry Brownlee, had both committed themselves upon an election victory in September 2017 to going to the celebrations in Israel on 31 October of that year to commemorate 100 years since the victorious Battle of Beer Sheva victory of which NZ soldiers played a vital role in the liberation of the Holy Land.