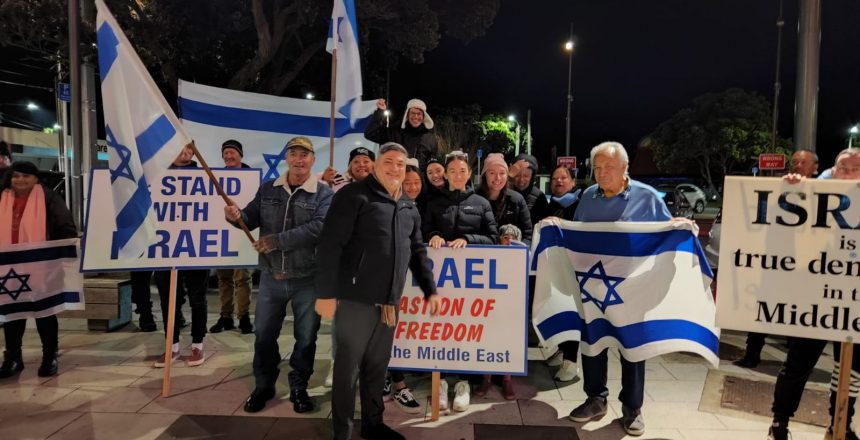 The Palestinian Solidarity Network Aotearoa (PSNA) was calling for a boycott of the Israeli directed documentary Dead Sea Guardians. This was being screened as part of the Doc Edge Festival 2022. Funding for the festival was obtained through different channels including international embassies in Wellington. The Israeli embassy had also part funded the event. Other pro-Palestinian groups were also calling for the boycott of the Israeli doco alongside the PSNA. John Minto who heads the PSNA had also promoted a protest rally at the Wellington screening outside the Roxy Theatre in Miramar starting one hour before the screening began:

The Flaxmere Christian Fellowship Church in Hastings organized a bus-load of its people to go to Wellington and hold a Standing With Israel rally at the same place at the same time. It turned out to be a thirteen hour round trip.

Our priority was to stand in support of Israel and the screening of the documentary. To us the calls for a boycott of Israeli arts is reminiscent of Nazi Germany’s call for the boycotting of Jewish shops and businesses in the 1930s, and the banning of Jews from the professions and from the arts. It was antisemitism then, and it is antisemitism now. Our aim firstly was to encourage those who had decided not to be intimidated by such calls, and as it happened not many were because it ended up a sell out crowd in the theatre. Secondly, we went to counter anything that the haters of Israel were prepared to do to discourage those entering the theatre to watch the screening.

Our bus and those who arrived by car, 45 people, set up a peaceful support rally outside the Roxy. Those arriving to watch the doco were encouraged when they saw our support. Israeli ambassador, His Excellency Ran Yaakoby, was very pleased to see us and took some time to acknowledge us. His deputy Ya’el also expressed satisfaction at seeing such support for Israel in New Zealand. As for the Palestinian Solidarity Network Aotearoa? They were nowhere to be seen. Perhaps they had realized the folly of their call. This was a movie about an Israeli, Palestinian, and Jordanian working together to help save the Dead Sea from an ecological disaster. Why boycott an Israeli movie that promotes peace and cooperation between Jew and Arab? Perhaps they heard we were coming and didn’t want a repeat of our confrontation at McLean Park in Napier 11 October 2021.

After we had made our stand for Israel we then entered the theatre and watched Dead Sea Guardians. It was a great documentary. We were grateful for the help we received in setting up our Roxy campaign. Ian Dunwoodie, a Wellingtonian, was a great support for logistics on the ground. Dr David Cumin from Auckland ensured that Wellington Police were notified of our intentions. The police did an outstanding job as they were professional and approachable.

Rally handout – ISRAEL IS NOT AN APARTHEID STATE

The Dominion Post in Wellington had invested considerable space on 11 June to let their readers know of the intentions of Israel’s detractors, namely Palestinians in Aotearoa, Justice for Palestine, and the Palestinian Solidarity Network Aotearoa. These groups were all calling for a boycott of the Israeli doco.

Therefore I thought that perhaps the Dominion Post may want to be objective and follow up on their original story by writing about the outcome of the event. Having seen no such report in the paper I sent the following email to Anna Fifield, their chief editor in Wellington, as well as to the head of news for Stuff, Mark Stevens:

No reply or acknowledgment of my email has been received!